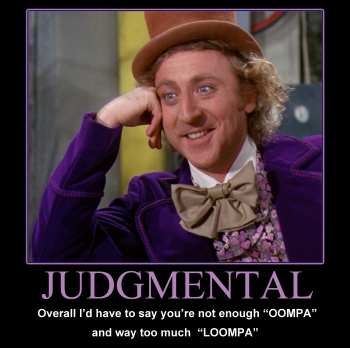 What does that word stir up in you? Have you ever been judged? What was that like? Did you want to backslap somebody for hatin’ on who you’re datin’, or judging when you’re pudging? What about you? Who have you judged in the last hour? Was it Katy Perry’s haircut? Was it the homeless guy on the corner? Was it yourself?

I bet I can make this statement and we can probably all agree on it (unless you’re one of THOSE people)….

Judging that statement yet?

That statement puts a nice spin on nasty behavior. There is a time and a place for judgment of others and I don’t have the degree for it even though I do dabble in it WAY more than I should.

I have another statement that I’ll throw out there and see where it hits you.

That’s a Josh Tippy original quote in case you want to share later…. 🙂

How many have heard “don’t judge a book by its cover”? (If you haven’t then I’m judging you). How many saw the “Fifty Shades of Grey” book title and thought it was about painting? (Only me?)

I was in church today and Reverend Shante Buckley let us have it on the word of judgment (that’s the message that I heard anyways). From the minute she started she addressed moments of judgment. She talked about today being the Holy Day of Pentecost and she asked “what does that word make you think of?” I mean, I thought of snakes and peanut brittle. (See the judge in me! Told you I did it too)! I used to go to a church with Pentecostal teaching so I can say what I know!

How many people who stop at a red light pray that it changes before that “homeless” person gets to them?! (How many things are wrong with that statement and prayer?) You know you’ve thought it! We are humanly flawed to the core at times. We make our own judgments of that person’s story and how they got “homeless”. Here’s a couple of statements I’ve heard others say (or I’ve said).

Ooooooo ouch! Right? Feels different reading it! I have no clue as to what or why this person is asking for help. The point is they are asking for help and rather than having the integrity of the faith/religion I stand for (the whole point of the message is to HELP others and LOVE) I spent my time labeling this person with my ASSUMPTION. I totally failed at living up to the most essential aspect of being a loving, compassionate, Christian human being which is acknowledging that the other person exists and has value. Forget what I think I know, the fact remains that the person is in need and my MORE THAN FORTUNATE BUTT should be helping the world and not hurting it.

(SIDE NOTE – Thanks Shante for making the Bible so relatable and for loving all people. I learned this lesson today. You are an amazing leader and Pastor. I love experiencing you teach and preach at LIFT!)

SEE where judgment gets you? For those that want the world to be a better place it’s time to stop judging, fudging or mean mugging the truth about what we are all called to do if we seek love and community.

I’ll share a real life example of judgment and what it can do. This is a personal story but I’m sure others will be able to relate.

(Picture it, Sicily 1925…. (haha kidding) – Picture this, a young, closeted, 18-year old Christian trying to find a place in the church)

I was lucky enough to have mentors and friends that loved me. The youth minister’s words to me were that he didn’t care about all the gay stuff but to just come to church and to continue to love and serve God (paraphrased). He was a reflection of my loving God and who I wish the church acted like today. It was reassuring definitely! He allowed me to help with the youth group and I found myself loving it. I could see God so alive in this place that being part of it made me thrive. Well, about a year into it (could be less or more time), one of the Pastors (not the youth minister I had worked with) came to me and told me that I couldn’t participate in the youth anymore because being gay “had an appearance of evil”. Keep in mind at this point being gay was only my “thorn”. The only person that knew this about me was my best friend. I had been in counseling more for it than I had actually experienced it. This broke my soul to its core as these were people I had looked up to. The Youth Minister reassured me of my place in the church but the trauma couldn’t be undone. Their judgment impacted who I was and they didn’t even know my whole story. I was then “gay” which meant any number of things to them. They assumed they knew my truth when they didn’t. Their judgment existed on what it meant to be gay far before Josh Tippy came Along. How could a gay person be a Christian if they didn’t fake their way straight? Fortunately God is so much bigger than people and loves me gay and all.

This story is not about the church or the people involved. It’s not about God or a religion.

It’s about the act of assuming and allowing your own reality to supersede and manifest into other’s reality (that statement makes sense to me but it might just be a bunch of fancy words together and sounds good. Flashy sometimes distracts me.) It’s about projecting your beliefs on someone else’s actions, or inaction. It could just be their current status in life but we believe something else so that means it’s true (eye rolling).

Can you believe that’s just ONE example of judgment! (there is actually probably several moments of judgment in there deep within the layers)

Let’s try this route of judgment on?

How many of you take a side glance in the mirror and decide that you don’t look “good enough” today? How many of you say that you aren’t smart enough to let your voice matter? How many of you let that same judge that just neglected a homeless person destroy YOU (not just others but now you too)?

Let me ask another question….. WHEN did we get so smart, cool, awesome, wise, right, Heavenly, or Wonder Woman-ish enough to judge anyone or anything?

While I know some will read this and think that “we have to judge or how will we know right from wrong?” and that’s ok. I just hope that what we all can gain from this blog is the idea that we can’t do this thing called life from a golden pedestal. We don’t KNOW everything and we need each other. To truly understand the story you have to know all the characters, the setting and the time. If you read The Hunger Games and thought it took place in a cafeteria then it wouldn’t make sense would it?

I hope one day that humanity will love one another and value the treasure that it is to exist.