It’s YOUR FAULT that I slipped and fell in the rain while I was eating a hotdog (on my diet I might add) and spilled mustard on my new white shirt! Thanks for being BORN jerk! I BLAME YOU for my problems!

Yeah that’s right! It’s your fault all those bad things happened to me! Wouldn’t you agree?

Do you ever feel like the telephone pole in this picture? 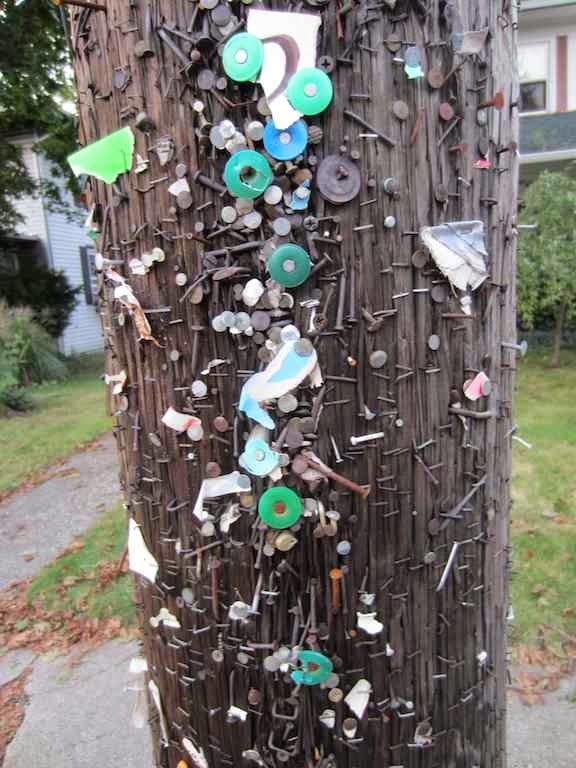 You are the pole and the staples are everyone else’s attempt and making you the villan. All that fun other stuff is what was left on you after you were marked! You know what I’m talking about when I say “fun other stuff” too. It’s the needless hours of wondering if you really did half the crap that you were told you did or the hours of defending yourself so that you feel better.

What if you are the one with the staples gladly tacking your problems to everyone else? That’s easy right? It’s so much easier to blame others for your problems so you don’t actually have to OWN why your new white shirt has mustard on it!

So, I’ll admit it! I can be a TOTAL blamer! Every time I’m in the car stuck in traffic it’s because some other idiot is on their phone (meanwhile I’m posting about it on Facebook). Those jerks! Can’t they just focus on the road so that we all get to where we need to be on time and in one piece (as I swerve in another lane). I mean if they would do the ONE THING they are supposed to be doing, driving, then we’d all be better off! Now look, I’m LATE (probably would have helped if I left on time in the first place)!

Has this happened to anyone else or am I the only one in the world that’s done this?

Now that I’ve owned my on blaming tendencies, let me tell you about a time I was the receiver of such great feedback. All day I had been receiving one-liner texts from “Margie” (not a real name) that would answer my questions but that were also obviously passive aggressive. “K”, “I’m fine”, “whatever YOU want”, and “yeah” were her favorite responses to all my profound questions. Really? The answer to ending world hunger is “yeah, whatever YOU want”.  Come to find out, she was mad at me because I had eaten a salad for lunch and she had french fries. She was supposed to be on a diet and since I was actually following my diet, she was mad at me! It’s all my fault that SHE had fries!

I’d say we all have been on both sides of these stories wouldn’t you agree!?

So why do we do this? Why do we pin our issues on others? When we deflect blame onto others what we are really doing is shifting our attention on to someone else so that not only is someone else responsible for our issues, but we also don’t have to reflect on our part in the problem. I mean did we really cause the problem anyways? It’s their fault. We are perfect.

Another way we project or blame others is when we place the feelings we internalize on someone else as “their” issue. A great example of this was described by another blogger where she talks about her marriage and how she blamed EVERYTHING on her spouse. Once she divorced him and really dove into the bigger issues she realized and was able to own her own part of the problem. Another example is when one partner blames their other half for being a cheater when in fact it’s just a reflection on how they perceive themselves. Maybe they notice others a little too much or that their eyes have wandered a time or two too many. Don’t get me wrong, your partner could very well be cheating on you but that’s another blog. The major issue here though is the insecurity in owning our own issues. We don’t have it in us to see our own faults or our own downfalls so we staple it to everyone else.

Here’s a great video short by Brene Brown (one of my favorite authors)! It’s perfect for this topic! (here is the link) –  BLAMER

I love this quote from Brene, “People who blame a lot seldom have the tenacity and grit to actually hold people accountable because we spend all of our energy raging for 15 seconds figuring out whose fault something is”. So true, so true! I typically get lost in that moment for more like 15 mins…..days……. Don’t judge!

So how do we get out of this habit? Here are some practical steps to start battling the urge to projectile vomit your problems on others!!

As you learn more about yourself and take time to invest in being the best YOU things will happen that set you back. Do your best not to blame others for that because you are the only one responsible for you. Eckhart Tolle stated “Whenever something negative happens to you, there is a deep lesson concealed within it.” Will you choose to learn from that lesson or continue to blame?

DO OPPOSITE! Keep it real YA’AW!